Fill out the form below to send your request: fill in as many sections as possible to ensure the answer meets your needs closely. 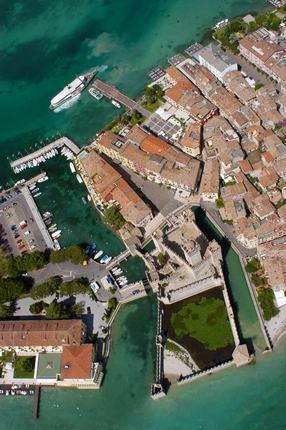 Today the city has 25’000 inhabitants and is known worldwide as tourist and thermal holiday destination. Sirmione has particularly left its mark in literature. During the Roman Empire Sirmione was praised by the poet Catullus, whose wealthy family had an estate in Sirmione in the 1st century B.C. Sirmione was ever since a connecting point between Brescia and Verona.
Another witness of Sirmione’s prominence around the lake is the largest Roman villa in northern Italy that was probably used as bath facility. After the Romans the Langobards and the Carolingians settled the town that became an important fishing and trading port.
The city of Sirmione did also set a sign against the heretic when the Scaliger Mastino ordered the closure of the centre where they lived and let burn over two hundred persons in the Arena of Verona. It is also thanks to the Scaligeri that the Rocca di Sirmione, the enormous moated castle, Sirmione’s most striking feature, was reconstructed and the port built.
After the Scaligeri it was the Visconti’s turn that where then replaced by the Lords of Padua. Sirmione was then reigned by the Venetians until 1797, by the French under Napoleon Bonaparte, the Austrian and was then integrated in the new Kingdom of Italy created in 1861.